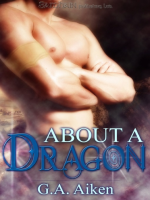 Talaith's life has never been easy. A goddess has forced her into servitude. Her husband despises her. And all those in her tiny village fear her. But just when she doesn't think her life can get any worse, she's pulled from her bed one morning to be burned at the stake for being a witch. What she never counted on was a terrifying silver dragon deciding to rescue her.

Briec the Mighty didn't really know what to do with a human female. Especially this one. Chatty and a bit of a complainer, he doesn't understand why she can't simply admit to herself that she wants him. Who wouldn't? He was Briec the Mighty after all. Females fought to spend the night in his arms. But this one tiny woman with her many secrets and her annoying habit of referring to him as "arrogant" has turned his simple dragon life upside down.

This book has been previously published as The Distressing Damsel by Shelly Laurenston and is available under its new title, in print, from Kensington Books.