Voyage of the Space Beagle »

Voyage of the Space Beagle: The basis for ALIEN 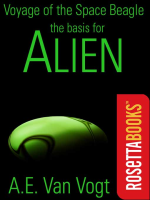 Description
"On and on Couerl prowled!" reads the first sentence of Black Destroyer (in the book version which also begins with that sentence the exclamation point has been removed), one of the most famous openings in science fiction. Through the novel, Couerl is just the first of a series of malevolent space-cats who invade the eponymous Space Beagle and threaten not only its crew but human destiny.The novel's protagonist is Elliott Grosvenor, a social scientist whose specialty is the unfamiliar discipline of Nexialism, the science whose study will fuse the known and the unknown. He is not initially welcome on the exploratory mission but it becomes Grosvenor who finds a way to defeat the alien invaders whose ships patrol the sector and who up to that point have seemed more ferocious and intelligent than their human counterparts and therefore more likely to subjugate them. Grosvenor, however, comes to understand that a crucial weakness is buried within the psychology of the invaders Can Nexialism, with its new insights into the alien mystery be used to expose that flaw? The crew of the Space Beagle is compact yet diverse, their relationships and their purpose strongly prefigure the spaceship Enterprise and Star Trek which followed almost thirty years later. In interviews later in life,Van Vogt explained his theory of fiction and the reason he believed that his work exerted such compelling force: he would introduce a new idea, character or event every 800 words. In that way the narrative would always be subject to swift changes of direction, surprises, diversions. It is this abruptness of attack which may explain that dreamlike force Brian Aldiss (in The Trillion Year Spree) delineates as at the core of Van Vogt's work, that "fine careless rapture" of imagination and description which for readers of the time redefined science fiction itself.Important in the history of science fiction as influence and as perhaps the first disciplined use of the theme of the space probe, THE VOYAGE OF THE SPACE BEAGLE was a landmark novel emerging from Van Vogt's early great period out of which in a breathtakingly brief period of time came THE WEAPON SHOPS OF ISHER, SLAN and THE MIXED MEN.
Also in This Series