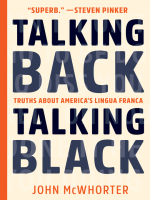 Description
"Superb." —Steven Pinker"An explanation, a defense, and, most heartening, a celebration. . . . McWhorter demonstrates the 'legitimacy' of Black English by uncovering its complexity and sophistication, as well as the still unfolding journey that has led to its creation. . . . [His] intelligent breeziness is the source of the book's considerable charm." —New Yorker"Talking Back, Talking Black is [McWhorter's] case for the acceptance of black English as a legitimate American dialect. . . . He ably and enthusiastically breaks down the mechanics." —New York Times Book ReviewLinguists have been studying Black English as a speech variety for years, arguing to the public that it is different from Standard English, not a degradation of it. Yet false assumptions and controversies still swirl around what it means to speak and sound "black." In his first book devoted solely to the form, structure, and development of Black English, John McWhorter clearly explains its fundamentals and rich history while carefully examining the cultural, educational, and political issues that have undermined recognition of this transformative, empowering dialect. Talking Back, Talking Black takes us on a fascinating tour of a nuanced and complex language that has moved beyond America's borders to become a dynamic force for today's youth culture around the world.

John McWhorter teaches linguistics, Western civilization, music history, and American studies at Columbia University. A New York Times best-selling author and TED speaker, he is a columnist for CNN.com, a regular contributor to the Atlantic, a frequent guest on CNN and MSNBC, and the host of Slate's language podcast, Lexicon Valley. His books on language include The Power of Babel; Our Magnificent Bastard Tongue; Words on the Move; Talking Back, Talking Black; and The Creole Debate.