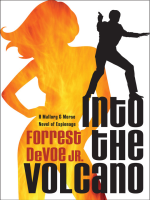 The year is 1962. John Glenn is in orbit, Audrey Hepburn is breakfasting outside Tiffany's, Elvis is recording "Bossa Nova Baby," and in Istanbul, a middle-aged Dutch spy has just met a fiery death. Enter Jack Mallory and Laura Morse, clandestine operatives for the Consultancy. He's a laconic ex-soldier from the oil fields of Corpus Christi; she's a wintrily beautiful Boston Brahmin and an adept at Floating Hand karate. The murdered man was their colleague, and the Consultancy has ordered them to exact revenge on the genially murderous Piotr Nemerov and the playboy-turned-arms-dealer Anton Rauth, who is holed up in his HQ in an extinct South Seas volcano preparing for a literally earthshaking confrontation.

Into the Volcano is an homage to James Bond, Modesty Blaise, and the golden age of the spy thriller, a time when America was still innocent and its enemies possessed a dash of Space Age style. It takes the reader from New York to Istanbul, from Cannes' balmy breezes to the island known as the Dragon's Throne, and at last into the molten heart of the Cold War.