The smoke at dawn »

The smoke at dawn: a novel of the Civil War 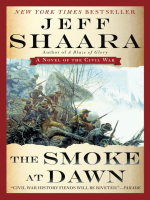 Description
"New York Times bestselling author Jeff Shaara returns to the Civil War terrain he knows so well, with the latest novel in the series that started with A Blaze of Glory and A Chain of Thunder. In The Smoke at Dawn, the last great push of the Army of the Cumberland sets the stage for a decisive confrontation at Chattanooga that could determine the outcome of the war. Summer, 1863. The Federal triumph at Vicksburg has secured complete control of the Mississippi River from the Confederacy, cementing the reputation of Ulysses S. Grant. Farther east, the Federal army under the command of William Rosecrans captures the crucial rail hub at Chattanooga. But Rosecrans is careless, and while pursuing the Confederates, the Federal forces are routed in north Georgia at Chickamauga Creek. Retreating in a panic back to Chattanooga, Rosecrans is pursued by the Confederate forces under General Braxton Bragg. Penned up, with their supply lines severed, the Federal army seems doomed to the same kind of defeat that plagued the Confederates at Vicksburg. But a disgusted Abraham Lincoln has seen enough of General Rosecrans. Ulysses Grant is elevated to command of the entire theater of the war, and immediately replaces Rosecrans with General George Thomas. Grant gathers an enormous force, including armies commanded by Joseph Hooker and Grant's friend, William T. Sherman. Grant's mission is clear: Break the Confederate siege and destroy Bragg's army. Meanwhile, Bragg wages war as much with his own subordinates as he does with the Federals, creating dissension and disharmony in the Southern ranks, erasing the Confederate army's superiority at exactly the wrong time. Blending evocative historical detail with searing depictions of battle, Jeff Shaara immerses readers in the world of commanders and common soldiers, civilians and statesmen. From the Union side come the voices of Generals Grant, William Tecumseh Sherman, and George Thomas--the vaunted "Rock of Chickamauga"--as well as the young private Fritz "Dutchie" Bauer. From the Rebel ranks come Generals Bragg, Patrick Cleburne, and James Longstreet, as well as the legendary cavalry commander, Nathan Bedford Forrest. A tale of history played out on a human scale in the grand Shaara tradition, The Smoke at Dawn vividly recreates the climactic months of the war in the West, when the fate of a divided nation truly hangs in the balance. Praise for Jeff Shaara's new Civil War series A Blaze of Glory "Brilliant. riveting. a work to be embraced."--Bookreporter "[An] exciting read. This novel is meticulously researched and brings a vivid reality to the historical events depicted."--Library Journal "Dynamic portrayals [of] Johnston, Grant and William Tecumseh Sherman."--The Wall Street Journal A Chain of Thunder "[A] riveting fictional narrative."--Booklist "Shaara continues to draw powerful novels from the bloody history of the Civil War. [He] aptly reveals the main actors: Grant, stoic, driven, not given to micromanagement; Sherman, anxious, high-strung, engaged even when doubting Grant's strategy. Worth a Civil War buff's attention."--Kirkus Reviews "Shaara's historical accuracy is faultless, and he tells a good story. The voices of these people come across to the reader as poignantly clear as they did 150 years ago."--Historical Novels Review"--
"The latest installment in the series that began with A Blaze of Glory and A Chain of Thunder. Summer, 1863: the Federal triumph at Vicksburg has secured complete control of the vital Mississippi River from the Confederacy. Under the now-proven leadership of Ulysses Grant, the victorious Federal army moves eastward, intent on the capture of the rail hub of Chattanooga, with the eventual goal of a march on Atlanta. But the Confederate forces are not yet defeated. Under General Braxton Bragg, the Confederates stun the Federal army with a bloody victory at the Battle of Chickamauga. The Federal commander there, William Rosecrans, leads a chaotic retreat back into Tennessee, where the Federal army soon finds itself besieged at Chattanooga. A disgusted Abraham Lincoln implores Grant to break the siege, and if successful, continue the strategy of crushing Bragg's army. Arriving in Chattanooga, Grant begins the campaign that will break the South's grip with an audacious attack driven by the zeal of the Federal soldiers themselves: the first in a series of triumphant victories that will drive the Confederates back to their great stronghold of Atlanta. The primary voices from the Northern side include Generals Grant, William T. Sherman and George Thomas and a young lieutenant named Sammie Willis. The voices of the Southern side include Generals Bragg, Patrick Cleburne, James Longstreet, and a young cavalry lieutenant, James Seeley, who rides with Nathan Bedford Forrest"--
Also in This Series