All libraries are closed Monday, July 4 for Independence Day. 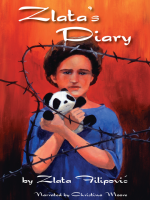 Description
Written with an innocence and desperation that will move readers of all ages, this international best-seller has touched the conscience of the world. Zlata's Diary stands out as a poignant reminder that war exacts a devastating toll on everyone-including children. Zlata Filipovic' began her diary just months before her 11th birthday in 1991. Peace still reigned in her hometown of Sarajevo, where she lived the carefree life of an innocent schoolgirl. But this life was suddenly shattered in 1992 when gunfire shook through the hills, and the streets of Sarajevo became the barbaric battlegrounds of the Bosnian war. As the onslaught of the war steadily invades her life, Zlata loses loved ones, endures months without decent food or running water, and spends weeks confined to her house as shells rain on the devastated city. Sustained by indomitable courage, she struggles to preserve the remains of her former existence. She learns to play the piano, celebrates special occasions with her closely-knit family-and faithfully records everything in this extraordinary diary.
Also in This Series