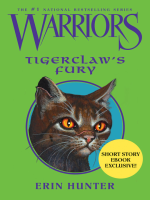 In this digital original novella from the world of Erin Hunter's #1 nationally bestselling Warriors series, discover the story behind Tigerclaw's rise to power as leader of ShadowClan. Cast out of ThunderClan as a traitor, Tigerclaw will not rest until he has his revenge on Bluestar, Fireheart, and the rest of his former Clanmates. But first he must become Tigerstar of ShadowClan. . . .

Readers will be thrilled at this look into the ruthless heart of one of the most infamous cats in the Warriors series, set between the events of Warriors #3: Forest of Secrets and Warriors #4: Rising Storm. Warriors: Tigerclaw's Fury also includes teaser chapters of Warriors: Leafpool's Wish and Dawn of the Clans #1: The Sun Trail.