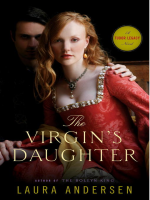 Description
Perfect for fans of Philippa Gregory and Alison Weir, The Virgin’s Daughter is the first book in a captivating new saga about the next generation of Tudor royals, which poses the thrilling question: What if Elizabeth I, the celebrated Virgin Queen, gave birth to a legitimate heir?   Since the death of her brother, William, Elizabeth I has ruled England. She’s made the necessary alliances, married Philip of Spain, and produced a successor: her only daughter, Anne Isabella, Princess of Wales. Elizabeth knows that her beloved Anabel will be a political pawn across Europe unless she can convince Philip to grant her a divorce, freeing him to remarry and give Spain its own heir. But the enemies of England have even greater plans for the princess, a plot that will put Anabel’s very life and the security of the nation in peril. Only those closest to Elizabeth—her longtime confidante Minuette, her advisor and friend Dominic, and the couple’s grown children—can be trusted to carry forth a most delicate and dangerous mission. Yet, all of the queen’s maneuverings may ultimately prove her undoing.Praise for The Virgin’s Daughter   “Thrilling . . . [Laura Andersen’s] characters are well imagined and consistent, especially the Tudor siblings. . . . [The Virgin’s Daughter] balances action and plot with emotion and character development. . . . One of the best things about alternative history is that you don’t know what will happen next, and Andersen takes full advantage of that fact.”—The Roanoke Times   “The plot includes many threads, yet they are weaved together flawlessly. Andersen brilliantly blends the history and historical characters we know into her wondrous new world.”—RT Book Reviews   Look for special features inside. Join the Random House Reader’s Circle for author chats and more.
Also in This Series