Sailing to Capri: A Novel 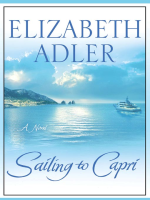 Description
Adler invites you on a decadent Mediterranean cruise where nothing is what it seems, no one is telling the truth, and murder is on the agenda. When English tycoon Sir Robert Waldo Hardwick dies mysteriously in a car accident, he leaves behind a note naming six people he suspects might have wanted him dead. Daisy Kean and P.I. Harry Montana team up to take the suspects, and also six 'red herrings', on a fabulous Mediterranean cruise, all expenses paid by the late Sir Robert. As they call at Monte Carlo, St. Tropez and Sorrento, the mystery deepens. And the unexpected twists are just the beginning.
Also in This Series