Driving with the Devil »

Driving with the Devil: Southern Moonshine, Detroit Wheels, and the Birth of NASCAR 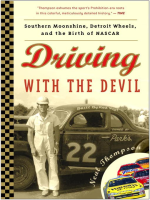 Description
The true story behind NASCAR’s hardscrabble, moonshine-fueled origins, “fascinating and fast-moving . . . even if you don’t know a master cylinder from a head gasket” (Atlanta Journal-Constitution).

Today’s NASCAR—equal parts Disney, Vegas, and Barnum & Bailey—is a multibillion-dollar conglomeration with 80 million fans, half of them women, that grows bigger and more mainstream by the day. Long before the sport’s rampant commercialism lurks a distant history of dark secrets that have been carefully hidden from view—until now.

In the Depression-wracked South, with few options beyond the factory or farm, a Ford V-8 became the ticket to a better life. Bootlegging offered speed, adventure, and wads of cash. Driving with the Devil reveals how the skills needed to outrun federal agents with a load of corn liquor transferred perfectly to the red-dirt racetracks of Dixie. In this dynamic era (the 1930s and ’40s), three men with a passion for Ford V-8s—convicted felon Raymond Parks, foul-mouthed mechanic Red Vogt, and war veteran Red Byron, NASCAR’s first champ—emerged as the first stock car “team.” Theirs is the violent, poignant story of how moonshine and fast cars merged to create a sport for the South to call its own.

In the tradition of Laura Hillenbrand’s Seabiscuit, this tale captures a bygone era of a beloved sport and the character of the country at a moment in time.
Also in This Series