The Selected Stories of... » 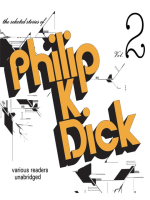 A visionary whose writing broke through the boundaries of the science fiction genre, Philip K. Dick is regarded as a major figure of twentieth-century fiction. In 2007, he became the first science fiction writer to be included in the Library of America Series.

Investigating spiritual questions through science fiction imagery, these stories explore the boundaries of human consciousness as they entertain such themes as multiple realities, creating life, and man's relationship to God.