Hard Times: An Illustrated Oral History of the Great Depression 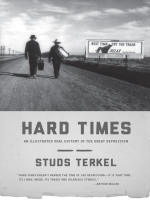 First published in 1970, Studs Terkel's bestselling Hard Times has been called “a huge anthem in praise of the American spirit" (Saturday Review) and “an invaluable record" (The New York Times). With his trademark grace and compassion, Terkel evokes a mosaic of memories from those who were richest to those who were destitute: politicians, businessmen, artists and writers, racketeers, speakeasy operators, strikers, impoverished farmers, people who were just kids, and those who remember losing a fortune.Now, in a handsome new illustrated edition, a selection of Studs's unforgettable interviews are complemented by images from another rich documentary trove of the Depression experience: Farm Security Administration photographs from the Library of Congress. Interspersed throughout the text of Hard Times, these breathtaking photographs by Dorothea Lange, Walker Evans, Jack Delano, and others expand the human scope of the voices captured in the book, adding a new dimension to Terkel's incomparable volume. Hard Times is the perfect introduction to Terkel's work for new readers, as well as a beautiful new addition to any Terkel library.