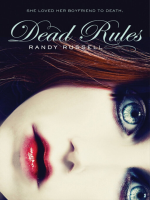 Jana Webster and Michael Haynes were in love. They were destined to be together forever.

But Jana's destiny was fatally flawed. And now she's in Dead School, where Mars Dreamcote lurks in the back of the classroom, with his beguiling blue eyes, mysterious smile, and irresistibly warm touch.

Michael and Jana were incomplete without each other. There was no room for Mars in Jana's life—or death—story. Jana was sure Michael would rush to her side soon.

But things aren't going according to Jana's plan. So Jana decides to do whatever it takes to make her dreams come true—no matter what rules she has to break.