The 200-MPH Billboard: The Inside Story of How Big Money Changed NASCAR 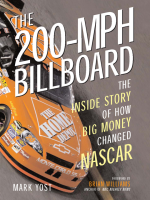 What began on the dusty racetracks of the rural South is now a world-class enterprise, as closely watched by Wall Street as by hometown racing fans. How NASCAR grew from its provincial roots to become a big business of international proportions is the story Mark Yost tells in The 200-MPH Billboard.
A seasoned sports and business reporter for the Wall Street Journal and contributor to the New York Times and the Sports Business Journal, Yost demystifies the economics and politics behind NASCAR sponsorship. His book takes us behind the scenes of some of the head-turning corporate deals that altered the way NASCAR does business.
From Junior Johnson's contract with Darrell Waltrip and Mountain Dew, which announced a significant change, to deals between the likes of Dale Jr. and Budweiser, Tony Stewart and Home Depot, NASCAR and Fox Television, this book clearly tracks the subtle and not-so-subtle transformations that corporate sponsorship has wrought in recent years. And it offers a rare insider's look at what these changes have meant for NASCAR and its devoted fans.