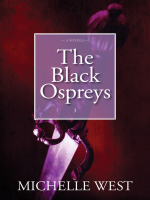 The Black Ospreys were a war-time unit, created in the heart of the Dominion of Annagar at the behest of one of the Empire's three Commanders. They did what the rest of the army couldn't—or wouldn't—do and their colors became the only colors feared by the Southerners.

Framed by the end of the events of the final battle in The Sun Sword, this is the story of the formation of the Black Ospreys, twelve years earlier.

A novella of approximately 16k words.