Sad Wind from the Sea »

Sad Wind from the Sea 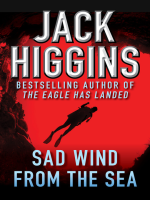 Mark Hagen is a far cry from the man he once was as a naval officer in World War II. Broken down and drunk, he's been reduced to living outside the law, gunrunning and smuggling with his dilapidated boat.

Then he rescues a woman from attackers in Macao. She's alone, she needs help—and she claims to know the whereabouts of a quarter-million dollars in gold, lying in a scuttled craft at the bottom of a lagoon in the blighted marshlands of southern China. With this one quick score, Hagen could change his luck for good.

Unfortunately, he's not the only one looking for the gold. There's the Chinese. And the Russians. And so many others.

But there's only one Mark Hagen—and he's not about to give up easily . . .

Originally published in 1963 under the name Harry Patterson, Sad Wind from the Sea is a searing debut set in the dangerous criminal underworld of the Pacific Rim, a gripping read that showcases the talents of a young writer whom Tom Clancy would one day hail as "the master."