Survivor's Guilt: The Secret Service and the Failure to Protect President Kennedy 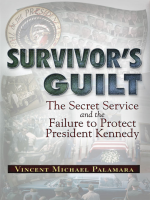 Painstakingly researched by an authority on the history of the Secret Service and based on primary, firsthand accounts from more than 80 former agents, White House aides, and family members, this is the definitive account of what went wrong with John F. Kennedy's security detail on the day he was assassinated. The work provides a detailed look at how JFK could and should have been protected and debunks numerous fraudulent notions that persist about the day in question, including that JFK ordered agents off the rear of his limousine; demanded the removal of the bubble top that covered the vehicle; and was difficult to protect and somehow, directly or indirectly, made his own tragic death easier for an assassin or assassins. This book also thoroughly investigates the threats on the president's life before traveling to Texas; the presence of unauthorized Secret Service agents in Dealey Plaza, the site of the assassination; the failure of the Secret Service in monitoring and securing the surrounding buildings, overhangs, and rooftops; and the surprising conspiratorial beliefs of several former agents. An important addition to the canon of works on JFK and his assassination, this study sheds light on the gross negligence and, in some cases, seeming culpability, of those sworn to protect the president.