The Science of Ocean Waves »

The Science of Ocean Waves: Ripples, Tsunamis, and Stormy Seas 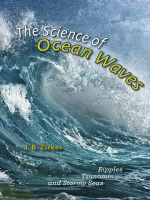 An unparalleled introduction to the amazing world of ocean waves.

"Powerful ocean waves fascinate the public, and they have made a lot of news lately." With that indisputable observation, scientist J. B. Zirker takes off on a whirlwind tour of the world of waves—from the "ordinary" waves that constantly churn the sea to the rogues or freaks that can rise up seemingly from nowhere to heights of 20 meters or more... and everything in between.

Addressing questions most ocean visitors have had and offering new ones for our consideration, The Science of Ocean Waves explains in accessible language how waves are formed, how they move, how they become huge and destructive, and how they're being studied now for clues that will help us plan for the future.

Devoting chapters to wind, tides, currents, breakers, tsunamis, forecasting, renewable energy, and El Niño—as well as discussing the gentler properties of ocean waves which inspire us and offer opportunities for relaxation and recreation—Zirker explores the physical factors that create waves.

Drawing on some of the recent storms that have devastated entire regions—such as Hurricane Katrina, the tsunami launched by the 2004 Sumatran earthquake, and the great tsunami that crushed the shore of Japan in 2011—Zirker explains the forces that cause these monster waves and reveals the toll they take on human lives.

Enhanced by dozens of illustrations and a comprehensive glossary, The Science of Ocean Waves will fascinate anyone curious about the science behind the headlines.

Praise for J. B. Zirker

"Scientists know their stuff but are rarely good storytellers, whereas good storytellers rarely possess the necessary sweeping command of a scientific discipline. Zirker is that rare animal who can both communicate the most demanding technical detail and make it accessible."—New Scientist