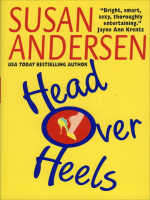 In Veronica Davis's case, who'd want to—especially when you hail from Fossil, Washington? But now she's back among the kooks and crazies, the small-time losers and the jerks who think she's fair game just because she's in a waitress uniform.

The truth is, Veronica's the boss—at least until she can sell the family saloon and skip town again as fast as her pretty legs can carry her—and nobody knows that better than Cooper Blackstock. From his place behind the bar, the former Special Forces Marine sees everything. And his undercover agenda has made the feisty boss-lady's troubles his own.

And her troubles are considerable, what with a family in turmoil, a pseudo-bartender with dangerous secrets, a murder investigation and death threats. Though the town surprisingly rallies in support, it's still a good thing that Cooper will be there to catch Veronica if she stumbles—if he doesn't start falling himself.