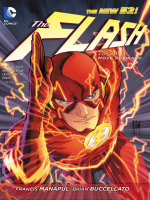 The Fastest Man Alive returns with the writer/artist team of Francis Manapul and Brian Buccellato. The Flash knows he can't be everywhere at once, but he has seemingly met his match when he faces DC Comics' hottest new Super Villain, Mob Rule, who really can be everywhere at once! As Mob Rule wages a campaign of crime across Central City, including an electromagnetic blast that plunges the city into darkness, The Flash learns the only way he can capture Mob Rule and save Central City is to learn how to make his brain function even faster than before—but as much as it helps him, it also comes with a steep price.