Where's the Birth Certificate?: The Case That Barack Obama Is Not Eligible to Be President 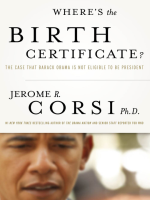 Over the course of more than three years of research, Jerome Corsi assembles the evidence that Barack Obama is constitutionally ineligible for the office of the presidency. As a New York Times bestselling author, Harvard graduate, and investigative journalist, Corsi exposes in detail key issues with Obama's eligibility, including the fact the President has spent millions of dollars in legal fees to avoid providing the American people with something as simple as a long-form birth certificate. The eligibility issue has major ramifications for every American, and through Corsi's in-depth research, a clear, concise, and compelling case is made for a return to Founding Father principles and transparent, constitutional government, starting from the top down.