Forecast: The Consequences of Climate Change, from the Amazon to the Arctic, from Darfur to Napa Valley 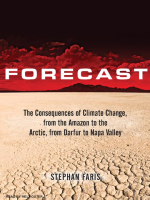 While reporting just outside of Darfur, Stephan Faris discovered that climate change was at the root of that conflict, and he began to wonder what current and impending---and largely unanticipated---crises such changes have in store for the world.

Global warming will spur the spread of many diseases. Italy has already experienced its first climate-change epidemic of a tropical disease, and malaria is gaining ground in Africa. The warming world will shift huge populations and potentially redraw political alliances around the globe, driving environmentalists into the hands of anti-immigrant groups. America's coasts are already more difficult places to live, as increasing insurance rates make the Gulf Coast and other gorgeous spots prohibitively expensive. Crops will fail in previously lush places and thrive in some formerly barren zones, altering huge industries and remaking traditions. Water scarcity in India and Pakistan have the potential to inflame the conflict in Kashmir to unprecedented levels and draw the United States into the troubles there and elsewhere.

Told through the narratives of current, past, and future events, the result of astonishingly wide travel and reporting, Forecast is a powerful, gracefully written, eye-opening account of this most urgent issue and how it has altered and will alter our world.