Dawn of the Golden Promise »

Dawn of the Golden Promise 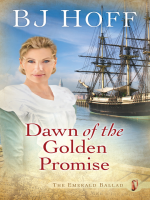 In the fifth and concluding volume of her bestselling The Emerald Ballad Series, BJ Hoff brings the exciting Irish-American historical drama to a climax with all the passion and power readers have come to expect from her. The saga finds Morgan Fitzgerald adapting to life in a wheelchair as a result of an assailant's bullet to his spine. Meanwhile, his wife, Finola, must face the dark memories and guarded secrets of her past. In New York City, policeman Michael Burke is caught in a conflict between his faith and his determination to bring a dangerous enemy to justice. This unforgettable series began with the promise of an epic love story and an inspiring journey of faith. The finale delivers on that promise.

About This Series: BJ Hoff's Emerald Ballad series was one of the most memorable series published in the 1990s. With combined sales of 300,000 copies, these beloved books found a place in the hearts of BJ's many fans. Now redesigned and freshly covered the saga is available again to a new generation of readers—and BJ's many new fans due to her highly successful Amish series, The Riverhaven Years—The Emerald Ballad series will once again find an enthusiastic audience.