Flight of the Phoenix »

Flight of the Phoenix 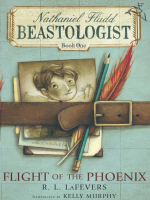 Description
Nathaniel Fludd's life has taken a turn for the worst. With his parents lost at sea, he lands on the doorstep of a distant cousin--the world's last remaining beastologist. Soon Nate is whisked off on his first expedition, to Arabia, where the world's only phoenix prepares to lay its new egg. When disaster strikes, Nate quickly finds himself all alone. nbsp;nbsp;nbsp;nbsp;nbsp;nbsp; Will he be able to see the phoenix safely hatched, keep his accidental pet gremlin out of trouble, and rescue his guardian from the Bedouin? If he fails, nothing will stand between the world's mythical creatures and extinction. Too bad Nate's not the sort of boy who enjoys adventure . . .yet.
Also in This Series