Factory Made: Warhol and the Sixties 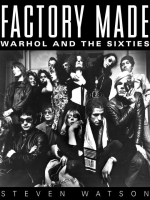 Factory Made: Warhol and the Sixties is a fascinating look at the avant-garde group that came together--from 1964 to 1968--as Andy Warhol's Silver Factory, a cast that included Lou Reed, Nico, Edie Sedgwick, Gerard Malanga, Paul Morrissey, Joe Dallesandro, Billy Name, Candy Darling, Baby Jane Holzer, Brigid Berlin, Ultra Violet, and Viva. Steven Watson follows their diverse lives from childhood through their Factory years. He shows how this ever-changing mix of artists and poets, musicians and filmmakers, drag queens, society figures, and fashion models, all interacted at the Factory to create more than 500 films, the Velvet Underground, paintings and sculpture, and thousands of photographs. Between 1961 and 1964 Warhol produced his most iconic art: the Flower paintings, the Marilyns, the Campbell's Soup Can paintings, and the Brillo Boxes. But it was his films--Sleep, Kiss, Empire, The Chelsea Girls, and Vinyl--that constituted his most prolific output in the mid-1960s, and with this book Watson points up the important and little-known interaction of the Factory with the New York avant-garde film world. Watson sets his story in the context of the revolutionary milieu of 1960s New York: the opening of Paul Young's Paraphernalia, Truman Capote's Black and White Ball, Max's Kansas City, and the Beautiful People Party at the Factory, among many other events. Interspersed throughout are Watson's trademark sociogram, many black-and-white photographs--some never before seen--and quotes and slang that help define the Warholian world. With Factory Made, Watson has focused on a moment that transformed the art and style of a generation.With a new Introduction to the eBook Edition and outtakes from Steven Watson's Silver Factory interviews, 1999-2002. Note: The eBook edition includes select photographs from the print edition.