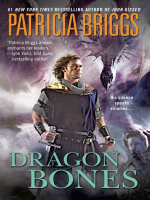 Description
From #1 New York Times bestselling author Patricia Briggs comes the first "thrilling"* novel in the Hurog duology.
Most everyone thinks Ward of Hurog is a simple-minded fool—and that's just fine by him. But few people know that his foolishness is (very convincingly) feigned. And that it's the only thing that's saved him from death.

When his abusive father dies, Ward becomes the new lord of Hurog...until a nobleman declares that he is too dim-witted to rule. Ward knows he cannot play the fool any longer. To regain his kingdom, he must prove himself worthy—and quickly.

Riding into a war that's heating up on the border, Ward is sure he's on the fast track to glory. But soon his mission takes a deadly serious turn. For he has seen a pile of magical dragon bones hidden deep beneath Hurog Keep. The bones can be dangerous in the wrong hands, and Ward is certain his enemies will stop at nothing to possess them...
Also in This Series