Down River: A Novel 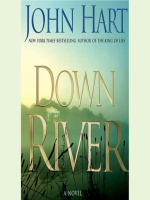 The New York Times bestselling and Edgar Award-winning novel with from an author whose "prose is like Raymond Chandler's, angular and hard" (Entertainment Weekly).

Adam Chase has spent the last five years in New York City trying to erase his worst memories and the scorn and abandonment of his family. Then a phone call from his best friend awakens in him a torrent of emotion and pain. Having left North Carolina and its red soil for good, he never thought returning would be easy—but being remembered as a murderer doesn't help much. Adam is beaten, accosted, and hostilely confronted by his family, including Grace, the young woman whose abandonment torments him still.

Then people start turning up dead.

Within this small Southern town, John Hart explores the lengths to which people will go for money, family, and pure greed—and whether or not forgiveness is ever attainable.