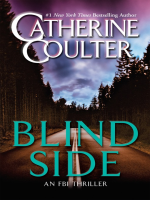 Description
FBI agents Savich and Sherlock face two baffling cases in Catherine Coulter's electrifying new thriller. Catherine Coulter's fast-paced FBI novels featuring married FBI agents Lacey Sherlock and Dillon Savich have rocketed up the New York Timesbestseller lists and garnered millions of fans. Coulter's heady blend of action and intrigue grows more intoxicating with each book-and reaches new heights in BlindSide. When six-year-old Sam Kettering is kidnapped and then manages to save himself, Savich and Sherlock join his father-former FBI agent Miles Kettering-to determine why Sam would be abducted and brought to eastern Tennessee. Although the local sheriff, Katie Benedict, kills the kidnappers, the attempts do not stop. The investigation leads them to charismatic, intense evangelist Reverend Sooner McCamy and his enigmatic wife. At the same time, Savich and Sherlock are desperate to locate the killer of five Washington, D.C., teachers. And meet Valerie Rapper, a woman on a mission: she wants Savich in the worst way. . . A riveting novel of knife-edge suspense, BlindSideis Catherine Coulter at the top of her game.
Also in This Series