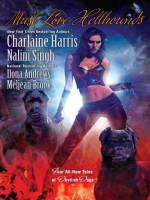 Description
Paranormal bodyguards Clovache and Batanya venture into Lucifer's realm to encounter his fearsome four-legged pets in The Britlingens Go to Hell. A traitor is being sought out in the midst of a guild of non-lethal vampire trackers in Angels' Judgement. In Magic Mourns, the giant three-headed dog that guards the gates of Hades has left the underworld for the real world following a scent while Blind Spot follows the adventures of a hellhound in search of the kidnapped niece of a powerful vampire.
Also in This Series