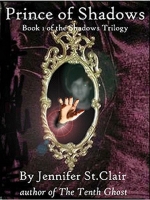 Description
When Alban's father appeared with a vampire and apologies, Alban fell under his spell just like everyone else and welcomed him home. But Terrin did not return to live quietly in his brother's kingdom. He had other plans, and with Alban's untrained powers at his disposal, he begins his plan to destroy the Seven Kingdoms and rule them all, beginning with his brother's death.
He casts the blame on his nephew. But there are those who would thwart him, and Alban forms an alliance with Skade, the reclusive Queen of Iomar, and Terrin's slave, a young vampire.

But a darker history lies at the heart of Terrin's treachery, and only Skade knows the true reason why Terrin would murder his own brother and attempt to destroy both Alban and the vampire to achieve his goals.

But the past will collide with the present, and the future remains uncertain.