The Case for Sanctions... »

The Case for Sanctions Against Israel 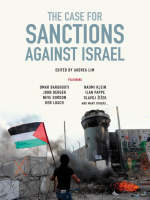 In July 2011, Israel passed legislation outlawing the public support of boycott activities against the state, corporations, and settlements, adding a crackdown on free speech to its continuing blockade of Gaza and the expansion of illegal settlements. Nonetheless, the campaign for boycott, divestment, and sanctions (BDS) continues to grow in strength within Israel and Palestine, as well as in Europe and the US.

This essential intervention considers all sides of the movement--including detailed comparisons with the South African experience--and contains contributions from both sides of the separation wall, along with a stellar list of international commentators.