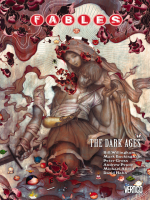 WINNER OF FOURTEEN EISNER AWARDS Tourists of the world unite! If you've ever craved a guided tour of Fabletown's secret Manhattan location, prepare to be voraciously satiated. Pinnochio has a field day taking a certain VIP around the city. Andexactly which Fabletown denizens are no longer active (dead, alive or otherwise) just might shock you into a comic-book coma. Also in this volume, you'll find the 4-part story featuring Freddy and Mouse, two local rogues who just want to get alongand perhaps turn a bit of profit in the post-war, topsy-turvy world. Meanwhile, in Fabletown, a new political group forms called the Society of Seconds, and what they want doesn't seem very reasonable at all. Collects issues #76-82 in BillWillingham's Eisner Award-winning Vertigo series.