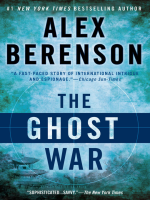 Description
CIA agent John Wells returns, in a novel that reaches beyond today's headlines to foretell dangers yet to come, from the author of The Faithful Spy- one of the best spy stories ever told (The Wall Street Journal). Alex Berenson's 2006 debut was one of the most acclaimed suspense novels of the year, the best spy thriller in a long, long while (The Kansas City Star). The Ghost War proves that he is no longer a brilliant newcomer but a master of the art. In The Faithful Spy, John Wells became the only American CIA agent ever to penetrate al-Qaeda, but his handlers became distrustful of him, and he of them. He had to stop a devastating terrorist attack nearly alone. Now Wells is back in Washington. His wounds have healed, but his mind is far from clear. He is restless, uneasy in his skin, and careless with his safety. When the CIA finds evidence of a surge in Taliban activity, backed by an unknown foreign power, it takes little to convince Wells to return to Afghanistan to investigate. But what he discovers there is far from what he expected. A deadly power play in China, a mission to North Korea gone terribly wrong, an Iran determined to go nuclear, a mole within the ranks of the CIA who is about to light a fuse, the consequences of which he cannot possibly understand-the world is hurtling toward confrontation. And, this time, there may be nothing John Wells can do to stop it. Real-world threats, authentic details, a scenario as dramatic as it is plausible-The Ghost War is another timely reminder of the extremely precarious way we live now (The Washington Post).
Also in This Series