4 Bodies and a Funeral »

4 Bodies and a Funeral 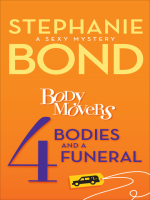 Description
One cadaver, two cadaver, three cadaver, four… Ever had one of those days? A surprise visit from her father--who's on the run from the law--has given Carlotta Wren a lot to think about. Should she join her former fiancé, Peter, in proving her father is innocent? If she does, are her body-moving days over? And then. . . . A close friend's behavior begins to spin out of control. . . .The cops turn up the heat on her father's case. . . . Carlotta discovers that her brother Wesley's gambling debts are child's play compared to his new vice. . . . And the Charmed Killer, a serial murderer, unleashes his wrath on Atlanta. Now the bodies are piling up--and Carlotta's father is the number one suspect! From the Compact Disc edition.
Also in This Series