A Cow's Life: The Surprising History of Cattle, and How the Black Angus Came to Be Home on the Range 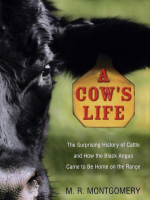 Millions of people, from nature lovers to collectors of cow memorabilia, are enamored of cows, yet few have any inkling of the fascinating history of, arguably, the animal most crucial to the survival and advancement of human civilization. Our close relationship with cows goes back eight thousand years, to the revolutionary advent of domestication in Mesopotamia and the Indus River valley. Since then, humans have relied on cows for milk, meat, and muscle. M. R. Montgomery's own keen interest in cows began on his cousin's Montana cattle ranch. He traces their history from the formidable, long-extinct Auroch-the 6,000-pound ancestor of all cattle on Earth-to the ancient cattle roads and drives in England, to the selective mixing practiced by British cattlemen well before Charles Darwin or Gregor Mendel. He charts the origin of breeds and relates the path by which the Aberdeen-Angus has today become the "king of cows." With a sympathetic eye for detail, born of his own experience, he chronicles the day-to-day life of cattle and their keepers- from encouraging good mothering skills to rooting out genetic disease in a herd. After experiencing Montgomery's bovine fascination, even cow lovers will have new appreciation for the objects of their affection.