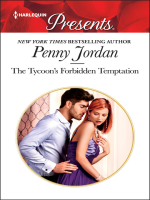 Description
The Tycoon's Forbidden Temptation Re-read this classic romance by New York Times bestselling author Penny Jordan,previously published as Rescue Operation in 1983 After suffering the ultimate betrayal, Chelsea Evans has learnt the hard way to steerclear of heart-breakers. So when she sees her innocent niece in danger of losing her headover notorious playboy Slade Ashford, she's determined to come to her rescue! Only the alluring tycoon is infinitely more sophisticated and desirable than Chelsea everimagined. And before long, it's clear that Chelsea is the woman Slade really wants--ifonly she dare surrender herself to this tycoon's forbidden temptation!
Also in This Series