My voice: a memoir 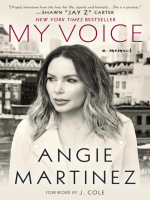 Description
"Radio icon Angie Martinez is "The Voice of New York." Now that voice speaks out about her experiences at the helm of the #1 radio show in the country and her unlikely path to the heart of hip-hop music. In her twenty years behind the mic at New York City's two biggest hip-hop stations--Hot 97 and Power 105.1--Angie Martinez has become an entertainment legend. From one-time presidential hopeful Barack Obama to Jay-Z and Beyonce to post-prison Tupac, her intimate and candid interviews with the leading names in the music business, hip-hop culture, and beyond have grabbed headlines and changed the conversation. In the same no-holds-barred style of her radio show, Angie shares stories from behind-the-scenes of her most controversial interviews and reflects on her climb to the top of the radio business. And for the first time, Angie opens up about her personal life, exploring how her experiences have shaped her into the strong and outspoken woman that she is today. The Power of a Voice brings together New York City's one-of-a-kind urban radio culture, the changing faces of hip-hop music, and Angie Martinez's rise to become the Voice of New York"--
Also in This Series