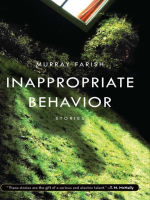 Short fiction about people on the edge that "masterfully balances the absurd, the horrific, and the humorous" (Booklist).
The characters in Inappropriate Behavior teeter on the brink of sanity, while those around them reach out in support, watch helplessly, or duck for cover. In their loneliness, they cast about for a way to connect, to be understood, though more often than not, things go horribly wrong. Some of the characters come from the darkest recesses of American history. In 'Lubbock Is Not a Place of the Spirit,' a Texas Tech student recognizable as John Hinckley, Jr. writes hundreds of songs for Jodie Foster as he grows increasingly estranged from reality. Other characters are recognizable only in the sense that their situations strike an emotional chord. The young couple in 'The Thing About Norfolk,' socially isolated after a cross-country move, are dismayed to find themselves unable to resist sexually deviant urges. And in the deeply touching title story, a couple stretched to their limit after the husband's layoff struggle to care for their emotionally unbalanced young son. Set in cities across America and spanning the last half-century, this collection draws a bead on our national identity, distilling our obsessions, our hauntings, our universal predicament.
"Gripping and accomplished . . . These stories will be compared with works by Barry Hannah and Denis Johnson." —Janet Peery, National Book Award finalist and author of The Exact Nature of Our Wrongs