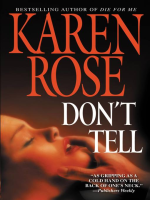 After faking her own death, a mother on the run from her abusive husband is desperate to start a new life — but as a new romance blossoms, he threatens to track her down . . .

It was a desperate plan. But Mary Grace Winters knew the only way to save herself and her child from her abusive cop husband was to stage their own death. Now all that remains of their former life is at the bottom of a lake. Armed with a new identity in a new town, she and her son have found refuge hundreds of miles away. As Caroline Stewart, she has almost forgotten the nightmare she left behind nine years ago. She is even taking a chance on love with Max Hunter, a man with wounds of his own. But her past is about to collide with the present when her husband uncovers her trail and threatens her hard-won peace. Step by step, he's closing in on her — and everything and everyone she loves.