Catalog Top of the Rock »  eBook »

Top of the Rock: Inside the Rise and Fall of Must See TV
(OverDrive MP3 Audiobook, OverDrive Listen) 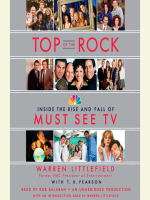 Description
Seinfeld, Friends, Frasier, ER, Cheers, Law & Order, Will & Grace…Here is the funny, splashy, irresistible insiders’ account of the greatest era in television history — told by the actors, writers, directors, producers, and the network executives who made it happen…and watched it all fall apart.
Warren Littlefield was the NBC President of Entertainment who oversaw the Peacock Network’s rise from also-ran to a division that generated a billion dollars in profits.  In this fast-paced and exceptionally entertaining oral history, Littlefield and NBC luminaries including Jerry Seinfeld, Jason Alexander, Kelsey Grammer, Matt LeBlanc, Lisa Kudrow, Julianna Marguiles, Anthony Edwards, Noah Wylie, Debra Messing, Jack Welch, Jimmy Burrows, Helen Hunt, and Dick Wolf vividly recapture the incredible era of Must See TV.
From 1993 through 1998, NBC exploded every conventional notion of what a broadcast network could accomplish with the greatest prime-time line-up in television history. On Thursday nights, a cavalcade of groundbreaking comedies and dramas streamed into homes, attracting a staggering 75 million viewers and generating more revenue than all other six nights of programming combined. The road to success, however, was a rocky one. How do you turn a show like Seinfeld, one of the lowest testing pilots of all time, into a hit when the network overlords are constantly warring, or worse, drowning in a bottle of vodka?

Top of the Rock is an addictively readable account of the risky business decisions, creative passion, and leaps of faith that made Must See TV possible. Chock full of delicious behind-the-scenes anecdotes that run the gamut from hilarious casting and programming ploys to petty jealousies and drug interventions, you’re in for a juicy, unputdownable read.
Also in This Series

Warren Littlefield. (2012). Top of the Rock: Inside the Rise and Fall of Must See TV. Unabridged Books on Tape.

Warren Littlefield. 2012. Top of the Rock: Inside the Rise and Fall of Must See TV. Books on Tape.

Warren Littlefield, Top of the Rock: Inside the Rise and Fall of Must See TV. Books on Tape, 2012.

Warren Littlefield. Top of the Rock: Inside the Rise and Fall of Must See TV. Unabridged Books on Tape, 2012.