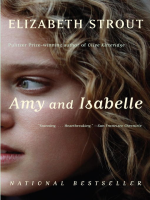 Description
Before there was Olive Kitteridge, there was Amy and Isabelle... "A novel of shining integrity and humor, about the bravery and hard choices of what is called ordinary life."—Alice Munro Pulitzer Prize winning author Elizabeth Strout's bestselling and award winning debut, Amy and Isabelle—adapted for television by Oprah Winfrey— evokes a teenager's alienation from her distant mother—and a parent's rage at the discovery of her daughter's sexual secrets. In most ways, Isabelle and Amy are like any mother and her 16-year-old daughter, a fierce mix of love and loathing exchanged in their every glance. That they eat, sleep, and work side by side in the gossip-ridden mill town of Shirley Falls—a location fans of Strout will recognize from her critically acclaimed novel, The Burgess Boys—only increases the tension. And just when it appears things can't get any worse, Amy's sexuality begins to unfold, causing a vast and icy rift between mother and daughter that will remain unbridgeable unless Isabelle examines her own secretive and shameful past. A Reader's Guide is included in the paperback edition of this powerful first novel by the author who brought Olive Kitteridge to millions of readers.
Also in This Series

Formats
Adobe EPUB eBook
Works on all eReaders (except Kindles), desktop computers and mobile devices with with reading apps installed.
Sample Sample  Place Hold OverDrive
OverDrive Read
Sample Sample  Place Hold OverDrive
Need Help?
If you are having problem transferring a title to your device, please fill out this support form or visit the library so we can help you to use our eBooks and eAudio Books.
More Like This