A Is for Alibi
(OverDrive MP3 Audiobook, OverDrive Listen) 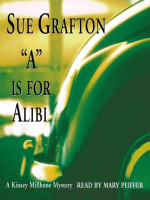 Description
When Laurence Fife was murdered, few mourned his passing. Plenty of people had reason to want him dead. But the police thought his wife Nikki—with motive, access and opportunity—was the #1 suspect. The jury thought so too.
Eight years later and out on parole, Nikki hires Kinsey Millhone, a gutsy P.I., to find the read killer. The trail is cold but Kinsey finds a lead. It brings her face-to-face with the murderer.
This is the first in the popular series featuring California investigator Kinsey Millhone. She's 32, twice divorced, no kids, an ex-cop who likes her work... and who works strictly alone.
Also in This Series