Catalog The Adventures of Gerard »  eBook » 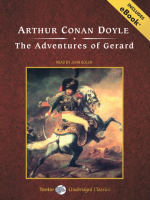