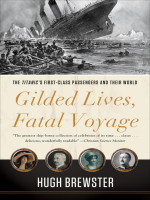 Description
Gilded Lives, Fatal Voyage takes us behind the paneled doors of the Titanic’s elegant private suites to present compelling, memorable portraits of her most notable passengers.
The Titanic has often been called "An exquisite microcosm of the Edwardian era,” but until now, her story has not been presented as such. In Gilded Lives, Fatal Voyage, historian Hugh Brewster seamlessly interweaves personal narratives of the lost liner’s most fascinating people with a haunting account of the fateful maiden crossing.
Employing scrupulous research and featuring 100 rarely seen photographs, he accurately depicts the ship’s brief life and tragic denouement and presents compelling, memorable portraits of her most notable passengers: millionaires John Jacob Astor and Benjamin Guggenheim; President Taft's closest aide, Major Archibald Butt; writer Helen Churchill Candee; the artist Frank Millet; movie actress Dorothy Gibson; the celebrated couturiere Lady Duff Gordon; aristocrat Noelle, the Countess of Rothes; and a host of other travelers. Through them, we gain insight into the arts, politics, culture, and sexual mores of a world both distant and near to our own. And with them, we gather on the Titanic’s sloping deck on that cold, starlit night and observe their all-too-human reactions as the disaster unfolds. More than ever, we ask ourselves, “What would we have done?”
Also in This Series