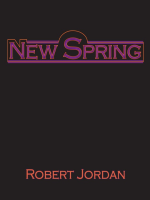 Description
In this expanded prequel to THE WHEEL OF TIME saga, Robert Jordan introduces the characters of Moiraine Damodred, a young Accepted soon to be raised to Aes Sedai, and Lan Mandragoran, a young soldier, whose paths are inextricably bound by a shared destiny. For three days battle rages around the great city of Tar Valon, until, on the slopes of Dragonmount, the immense mountain that looms over the city, the future is foretold: a newborn child is prophesied to change the world. But that child is in grave danger, and Moraine and Lan must find him before the forces of the Shadow have a chance to kill him. Their mission is fraught with complications and obstacles, and their lives threatened by those vying for power.
From the Compact Disc edition.
Also in This Series