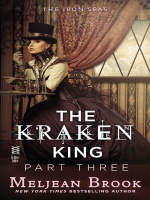 Description
Experience the incredible adventure and heart-stopping romance of the Iron Seas in this thrilling steampunk tale from New York Times bestselling author Meljean Brook.The Kraken King, Part IIIThe Kraken King and the Fox’s DenAfter a harrowing escape, Zenobia, Ariq, and their company take refuge in a gold rush town—but their temporary port is just a respite before traveling to the dangerous smugglers’ dens. Ariq is determined to uncover the men responsible for the threat to Krakentown, even if it means confronting the notorious den lords.But when he discovers evidence in Zenobia’s letters connecting her to the Horde rebellion, he realizes that the threat is far greater than he had suspected. His loyalties torn, Ariq must distance himself from the fascinating woman he desperately wants to hold closer.Stunned and hurt by Ariq’s inexplicable coldness, Zenobia prepares to leave the dens and continue her journey to the Red City. But in the smugglers’ dens, danger lurks around every corner, and all of her protection is gone…Includes a bonus excerpt of Meljean Brook’s Heart of Steel.More to come…Don’t miss The Kraken King, Part IVPraise for the novels of the Iron Seas:“A stunning blend of steampunk setting and poignant romance.”—Ilona Andrews, New York Times bestselling author“Every glimpse of this alternate history leaves me fascinated and hungry for more.”—All Things Urban Fantasy“Meljean Brook has brilliantly defined the new genre of steampunk romance.”—Jayne Ann Krentz, New York Times bestselling authorMeljean Brook lives in Oregon with her family. She is the author of the Guardian paranormal romance and Iron Seas steampunk series.
Also in This Series