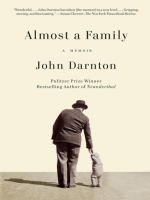 Description
From the Pulitzer Prize–winning journalist and best-selling author: a beautifully crafted memoir of his lifelong chase after his father’s shadow.
John was eleven months old when his father, Barney Darnton—a war correspondent for The New York Times—was killed in World War II, but his absence left a more profound imprint on the family than any living father could have. John’s mother, a well-known Times reporter and editor, tried to keep alive the dream of raising her two sons in ideal surroundings. When that proved impossible, she collapsed emotionally and physically. But along the way she created such a powerful myth of the father-hero who gave his life for his family, country, and the fourth estate that John followed his footsteps into the same newsroom.
Decades after his father’s death, John and his brother, the historian Robert Darnton, began digging into the past to uncover the truth about their parents. To discover who the real-life Barney Darnton was—and in part who he himself is—John delves into turn-of-the-century farm life in Michigan, the anything-goes Jazz Age in Greenwich Village, the lives of hard-drinking war correspondents in the Pacific theater, and the fearful loneliness of the McCarthy years in Washington, D.C. He ends his quest on a beach in Papua New Guinea, where he learns about his father’s last moments from an aged villager who never forgot what he saw sixty-five years earlier.
Also in This Series