Catalog The Year of the French »  eBook » 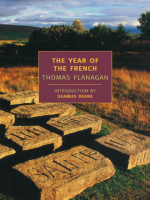 Description
In 1798, Irish patriots, committed to freeing their country from England, landed with a company of French troops in County Mayo, in westernmost Ireland. They were supposed to be an advance guard, followed by other French ships with the leader of the rebellion, Wolfe Tone. Briefly they triumphed, raising hopes among the impoverished local peasantry and gathering a group of supporters. But before long the insurgency collapsed in the face of a brutal English counterattack.
Very few books succeed in registering the sudden terrible impact of historical events; Thomas Flanagan’s is one. Subtly conceived, masterfully paced, with a wide and memorable cast of characters, The Year of the French brings to life peasants and landlords, Protestants and Catholics, along with old and abiding questions of secular and religious commitments, empire, occupation, and rebellion. It is quite simply a great historical novel.
Named the most distinguished work of fiction in 1979 by the National Book Critics’ Circle.
Also in This Series