Catalog And a Bottle of Rum »  eBook »

And a Bottle of Rum: A History of the New World in Ten Cocktails
(Adobe EPUB eBook, OverDrive Read) 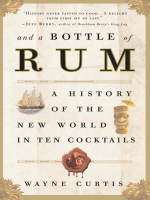 Description
Now revised, updated, and with new recipes, And a Bottle of Rum tells the raucously entertaining story of this most American of liquorsFrom the grog sailors drank on the high seas in the 1700s to the mojitos of Havana bar hoppers, spirits and cocktail columnist Wayne Curtis offers a history of rum and the Americas alike, revealing that the homely spirit once distilled from the industrial waste of the booming sugar trade has managed to infiltrate every stratum of New World society. Curtis takes us from the taverns of the American colonies, where rum delivered both a cheap wallop and cash for the Revolution; to the plundering pirate ships off the coast of Central America; to the watering holes of pre-Castro Cuba; and to the kitsch-laden tiki bars of 1950s America. Here are sugar barons and their armies conquering the Caribbean, Paul Revere stopping for a nip during his famous ride, Prohibitionists marching against "demon rum," Hemingway fattening his liver with Havana daiquiris, and today's bartenders reviving old favorites like Planter's Punch. In an age of microbrewed beer and single-malt whiskeys, rum—once the swill of the common man—has found its way into the tasting rooms of the most discriminating drinkers. Complete with cocktail recipes for would-be epicurean time-travelers, this is history at its most intoxicating.
Also in This Series

Wayne Curtis. (2009). And a Bottle of Rum: A History of the New World in Ten Cocktails. Crown/Archetype.

Wayne Curtis. 2009. And a Bottle of Rum: A History of the New World in Ten Cocktails. Crown/Archetype.

Wayne Curtis, And a Bottle of Rum: A History of the New World in Ten Cocktails. Crown/Archetype, 2009.

Wayne Curtis. And a Bottle of Rum: A History of the New World in Ten Cocktails. Crown/Archetype, 2009.