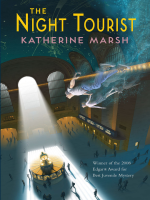 Description
Jack Perdu, a shy, ninth grade classics prodigy lives with father on the Yale University campus. Smart and introverted, Jack spends most of his time alone, his nose buried in a book. But when Jack suffers a near fatal accident, his life is forever changed. His father sends him to a mysterious doctor in New York City—a place Jack hasn't been since his mother died there eight years ago. While in the city, Jack meets Euri, a young girl who offers to show him the secrets of Grand Central Station. Here, Jack discovers New York's Underworld, a place where those who died in the city reside until they are ready to move on. This, Jack believes, is a chance to see his mother again. But as secrets about Euri's past are revealed, so are the true reasons for Jack's visit to the Underworld.
Also in This Series